What is the most resilient parasite?
A bacteria? A virus?
An intestinal worm?
An idea.
Resilient. Highly contagious.
Once an idea has taken hold of the brain, it's almost impossible to eradicate.
An idea that is fully formed, fully understood, that sticks.

No matter what anybody tells you, words and ideas can change the world.

A simple idea. Trust myself.

No idea is simple when you need to plant it in somebody else's mind.

The subject's mind can always trace the genesis of the idea. True inspiration's impossible to fake.

Baby turtles and alligators may seem like a cute idea for a pet, but they grow up.

No matter what people tell you, words and ideas can change the world.

Why do I always get my best ideas in the shower?

Something's wrong with the world. You don't know what, but it's there. Like a splinter in your mind driving you mad. It is this feeling that has brought you to me. 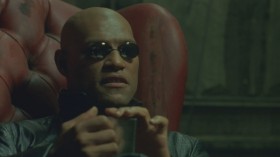 The Brotherhood cannot be wiped out because it is not an organization in the ordinary sense. Nothing holds it together except an idea which is indestructible.

Mortal danger is an effective antidote for fixed ideas.

A man may die, nations may rise and fall, but an idea lives on. Ideas have endurance without death.

So what about skyscrapers for dead people that were built down?

If one puts forward an idea to a true Englishman—always a rash thing to do—he never dreams of considering whether the idea is right or wrong. The only thing he considers of any importance is whether one believes it oneself. Now, the value of an idea has nothing whatsoever to do with the sincerity of the man who expresses it. Indeed, the probabilities are that the more insincere the man is, the more purely intellectual will the idea be, as in that case it will not be coloured by either his wants, his desires, or his prejudices.

But ideas only survive if someone is there to defend them!