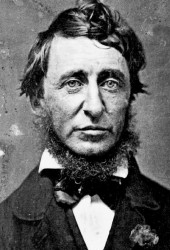 A leading transcendentalist, Thoreau is best known for his book Walden, a reflection upon simple living in natural surroundings, and his essay "Civil Disobedience" (originally published as "Resistance to Civil Government"), an argument for disobedience to an unjust state.
Thoreau's books, articles, essays, journals, and poetry amount to more than 20 volumes. Among his lasting contributions are his writings on natural history and philosophy, in which he anticipated the methods and findings of ecology and environmental history, two sources of modern-day environmentalism. His literary style interweaves close observation of nature, personal experience, pointed rhetoric, symbolic meanings, and historical lore, while displaying a poetic sensibility, philosophical austerity, and Yankee attention to practical detail. He was also deeply interested in the idea of survival in the face of hostile elements, historical change, and natural decay; at the same time he advocated abandoning waste and illusion in order to discover life's true essential needs.He was a lifelong abolitionist, delivering lectures that attacked the Fugitive Slave Law while praising the writings of Wendell Phillips and defending the abolitionist John Brown. Thoreau's philosophy of civil disobedience later influenced the political thoughts and actions of such notable figures as Leo Tolstoy, Mahatma Gandhi, and Martin Luther King Jr.Thoreau is sometimes referred to as an anarchist. Though "Civil Disobedience" seems to call for improving rather than abolishing government—"I ask for, not at once no government, but at once a better government"—the direction of this improvement contrarily points toward anarchism: "'That government is best which governs not at all;' and when men are prepared for it, that will be the kind of government which they will have."

What people say you cannot do, you try and find that you can.

The world is but a canvas to the imagination.

The greatest compliment that was ever paid me was when one asked me what I thought, and attended to my answer.

Our life is frittered away by detail. Simplify, simplify.

A man is rich in proportion to the number of things he can afford to let alone.

Some circumstantial evidence is very strong, as when you find a trout in the milk.

How vain it is to sit down to write when you have not stood up to live.

Every man is the builder of a temple called his body.

But government in which the majority rule in all cases can not be based on justice, even as far as men understand it.

I know of no more encouraging fact than the unquestioned ability of a man to elevate his life by conscious endeavor.