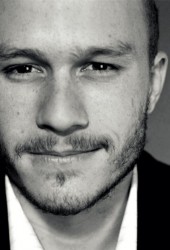 After performing roles in several Australian television and film productions during the 1990s, Ledger left for the United States in 1998 to further develop his film career. His work comprised nineteen films, including 10 Things I Hate About You (1999), The Patriot (2000), A Knight's Tale (2001), Monster's Ball (2001), Lords of Dogtown (2005), Brokeback Mountain (2005), The Brothers Grimm (2005), Casanova (2005), The Dark Knight (2008), and The Imaginarium of Doctor Parnassus (2009), the latter two being posthumous releases. He also produced and directed music videos and aspired to be a film director.For his portrayal of Ennis Del Mar in Brokeback Mountain, Ledger won the New York Film Critics Circle Award for Best Actor and the Best International Actor Award from the Australian Film Institute; he was the first actor to win the latter award posthumously. He was nominated for the BAFTA Award for Best Actor in a Leading Role and the Academy Award for Best Actor. Posthumously, he shared the 2007 Independent Spirit Robert Altman Award with the rest of the ensemble cast, the director, and the casting director for the film I'm Not There, which was inspired by the life and songs of American singer-songwriter Bob Dylan. In the film, Ledger portrayed a fictional actor named Robbie Clark, one of six characters embodying aspects of Dylan's life and persona.Ledger died on the afternoon of 22 January 2008 due to accidental intoxication from prescription drugs. A few months before his death, Ledger had finished filming his performance as the Joker in The Dark Knight. At the time of his death, The Dark Knight was in its editing-phase and The Imaginarium of Doctor Parnassus was in the midst of filming, in which he was playing his last role as Tony. His untimely death cast a shadow over the subsequent promotion of The Dark Knight. His role as the Joker in The Dark Knight immortalized Ledger, earning widespread acclaim and popularity from both fans and critics alike, and is often regarded as one of the greatest performances in film history. Ledger also received numerous posthumous accolades for his performance in The Dark Knight, including the Academy Award for Best Supporting Actor, a Best Actor International Award at the 2008 Australian Film Institute Awards, the 2008 Los Angeles Film Critics Association Award for Best Supporting Actor, the 2009 Golden Globe Award for Best Supporting Actor – Motion Picture, and the 2009 BAFTA Award for Best Supporting Actor.

Never give up on the things in life that make you smile. 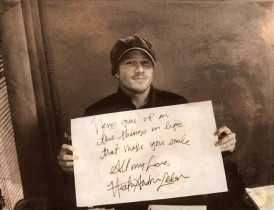 If you're just safe about the choices you make, you don't grow.

The reason that you dance and sing is to make the audience feel like they're dancing and singing. As long as you're having fun with it and giving it 100 percent, they're gonna feel that. I only do this because I'm having fun. The day I stop having fun, I'll just walk away.

It's like anything in life, visualizing the old man you're going to become: As long as you have a clear picture of that — the life you want to lead — eventually you'll probably get there.

I am not a public speaker and never will be.