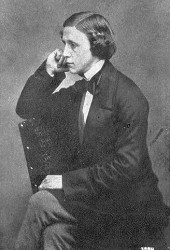 Charles Lutwidge Dodgson (27 January 1832 – 14 January 1898), better known by his pen name Lewis Carroll, was an English writer of world-famous children's fiction, notably Alice's Adventures in Wonderland and its sequel Through the Looking-Glass.

He was noted for his facility at word play, logic, and fantasy. The poems Jabberwocky and The Hunting of the Snark are classified in the genre of literary nonsense. He was also a mathematician, photographer, and Anglican deacon.
Carroll came from a family of high-church Anglicans, and developed a long relationship with Christ Church, Oxford, where he lived for most of his life as a scholar and teacher. Alice Liddell, daughter of the Dean of Christ Church, Henry Liddell, is widely identified as the original for Alice in Wonderland, though Carroll always denied this.

"Well! I've often seen a cat without a grin" thought Alice "but a grin without a cat! It's the most curious thing i ever saw in my life! ".

"Would you tell me, please, which way I ought to go from here?'
'That depends a good deal on where you want to get to,' said the Cat.
'I don't much care where -' said Alice.
'Then it doesn't matter which way you go,' said the Cat.
' — so long as I get SOMEWHERE,' Alice added as an explanation.
'Oh, you're sure to do that,' said the Cat, 'if you only walk long enough.”

The White Rabbit put on his spectacles. "Where shall I begin, please your Majesty? " he asked.
"Begin at the beginning, " the King said gravely, "and go on till you come to the end: then stop."