You know, people hate people who have theories about people.

— The Tyrannosaur doesn't obey any set patterns or park schedules. The essence of chaos.
— I'm still not clear on chaos.
— It simply deals with unpredictability in complex systems. The shorthand is the Butterfly Effect. A butterfly can flap its wings in Peking and in Central Park you get rain instead of sunshine. Was I going too fast? I missed it. I did a fly-by. Give me that glass of water. We'll conduct an experiment. We should be still. The car's bouncing. That's okay. It's just an example. Put your hand flat like a hieroglyphic. A drop of water falls on your hand. Which way will the drop roll off? Which finger? Thumb, I'd say. Freeze your hand. Don't move. I'll do the same thing, start with the same place again. Which way, now?
— Let's say back the same way.
— It changed. Why?
— Because tiny variations, the orientation of the hairs on your hands...
— Alan, look at this.
— The amount of blood distending your vessels, imperfections in the skin...
— «imperfections in the skin»?
— Just microscopic, never repeat and vastly affect the outcome. That's what? Unpredictability. There. Look at this. See? I'm right again. Nobody could predict that Dr. Grant would suddenly jump out of a moving vehicle.
— Alan? Alan!
— And there's another example. See, here I am now by myself, talking to myself. That's Chaos Theory. 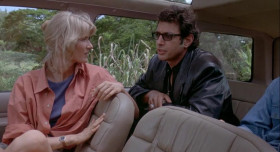 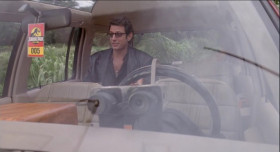 Our whole universe was in a hot dense state,
Then nearly fourteen billion years ago expansion started. Wait...
The Earth began to cool,
The autotrophs began to drool,
Neanderthals developed tools,
We built a wall (we built the pyramids),
Math, science, history, unraveling the mysteries,
That all started with the big bang!

A simple hypothesis can be wrong, but it’s something to build on.