I'm not a racist, it's my principle: despite the fact that I'm on a diet and I should eat only white meat I eat also red and dark (I hope this is not a racist words?) with great relish, enjoying every bite.﻿

Marty: What do you call a black man who flies a plane?
Bobby: I don’t know.
Marty: Pilot, you racist bastard.

If you're a sexist, racist, homophobe, or basically an asshole, don't buy this CD. I don't care if you like me, I hate you.

— Does he need help?
— Ex-con. White supremacist by the tattoos, so who cares?

The one place where a man ought to get a square deal is in a courtroom, be he any color of the rainbow, but people have a way of carrying their resentments right into a jury box.
As you grow older, you’ll see white men cheat black men every day of your life, but let me tell you something and don’t you forget it — whenever a white man does that to a black man, no matter who he is, how rich he is, or how fine a family he comes from, that white man is trash.

Eighteen people were killed in Jackson that night. Ten white and eight black. I don't think God has color in mind when he sets a tornado loose.

Racism is the ultimate ignorance in that it relates 'self' to the body instead of the Consciousness — Awareness — animating and experiencing through the body. It is like judging a man by his spacesuit instead of the person inside it.

By the time the white man learns to love, the black man will have learned to hate.

Prejudice is a burden that confuses the past, threatens the future and renders the present inaccessible.

— Why do you let those boys push you around like that for?
— They're bigger than me.
— Stand tall. Have some respect for yourself. If you let people walk over you now, they'll walk over you the rest of your life. Look at me. You think I'll spend my life in this slop house?
— Watch it, Goldie.
— No, sir! I'll do something. I'll go to night school. One day, I'm going to be somebody.
— That's right. He's going to be mayor.
— Yeah, I'm... Mayor! Now that's a good idea! I could run for mayor.
— A colored mayor. That'll be the day.
— Wait and see. I will be mayor. I'll be the most powerful man in Hill Valley and I'm going to clean up this town.
— Good. You can start by sweeping the floor. 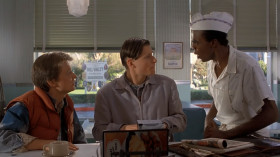 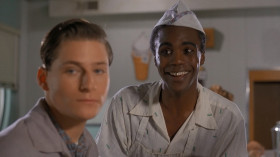 — Everybody wants the Cup for the wrong reason.
— And you don't?
— With this Cup I can cleanse our bloodlines... save our race.
— You might not know much about mundane history... but I can tell you when people start talking about preserving a race... it never goes well.

I always felt that to really play jazz, you had to be black. I'm just a mulatto.

When you say South Africa the first things that come to mind,
Is yup! Racism, apartheid, and crime.
Fuck a racist, motherfuckas is stuck in '89.
But the crime's still wylin,
Word to my nine!
Dis iz why I'm hot!

Only a damn fool can expect the people of one tradition to feel at ease when their country is flooded with hordes of foreigners who—whether equal, superior, or inferior biologically—are so antipodal in physical, emotional, and intellectual makeup that harmonious coalescence is virtually impossible

In 1996, in a state referendum, Californians voted 55% to embed a colorblind amendment in their state constitution:
«The State shall not discriminate against, or grant preferential treatment to, any individual or group on the basis of race, sex, color, ethnicity, or national origin in the operation of public employment, public education, or public contracting.»
<...>
The Democratic legislature, however, wants to be rid of this amendment as it outlaws the kind of racial and ethnic discrimination in which Sacramento wishes to engage.
<...>
If this passes...<...> — there will be racial and ethnic discrimination, as in the days of segregation. Only the color of the beneficiaries and the color of the victims will be reversed. And that is the meaning of the BLM revolution, which might be encapsulated: «It’s our turn now!»