I'm gonna make him an offer he can't refuse.

It is very romantic to be in love. But there is nothing romantic about a definite proposal. Why, one may be accepted. One usually is, I believe. Then the excitement is all over. The very essence of romance is uncertainty.

— Tess, will you marry me?
— Maybe.
— That's an answer?
— You want another answer, ask another girl. 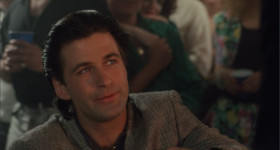 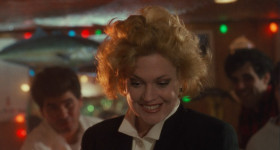 — There you go, miss. It was a difficult day for you, I'm sure.
— I suspected Commodore Norrington would propose but I must admit, I wasn't entirely prepared for it.
— Well, I meant your being threatened by that pirate. It sounds terrifying.
— Yes, it was terrifying.

Pirates of the Caribbean: The Curse of the Black Pearl
Elizabeth Swann
Ironic Quotes
Pirates
Fear
5
0
5
Posted by Дмитрий Кузнецов 10/12/20 at 12:00am

— My apologies, miss.
— Captain Barbossa, I am here to negotiate the cessation of hostilities against Port Royal.
— There were a lot of long words in there, miss. We're nought but humble pirates. What is it that you want?
— I want you to leave and never come back.
— I'm disinclined to acquiesce to your request. Means no.

Pirates of the Caribbean: The Curse of the Black Pearl
Hector Barbossa
Elizabeth Swann
Ironic Quotes
Aggression
Pirates
5
0
5
Posted by Дмитрий Кузнецов 10/12/20 at 12:53am

Sure, we could go out on another date and another date after that and more dates after that, but life is short and getting shorter, and I want to spend whatever time I have left with you. When we are together, it feels like we are speeding down the PCH in a Duesenberg, 12 cylinders with 400 cc's and turbo boosts and picnic basket in the back with baguettes and Gruyere and prosciutto and Chateauneuf-du-Pape, and you are sitting next to me, wind in your hair, and you are laughing that laugh, and the sun, and the ocean. And it just feels like we can go forever.

— We're not getting any younger. Don't you think it's time? Aren't you gettin' tired of all this shit? Bangin' around, hustlin' around?
— What, are you trying to handicap me?
— I'm gonna do you one better. I'm trying to marry you. You want to marry me?

— Mr Mosely is open to suggestion regarding who he can rely on to offer him support in London.
— Well, I would suggest the most competent organiser of men in the south... is Alfie Solomons.
— He's dead. And he's Jewish! And I'd say as far as our boss is concerned, him being dead would be less of an obstacle than him being Jewish.

— Tommy, Tommy, sweetheart... why would a man whose medals rust at the bottom of the Saltley canal want to help the British military?
— Because I've been offered three five-year contracts to supply military vehicles to the British forces in India, Ceylon, Singapore and Burma, total value — 2 million pounds.
— And there'll be no strikes in your factory because Jessie Eden will be in your bed. Tommy, this can only happen if you're still alive.
— I'm planning on staying live. If I'm dead, you can all go back to being what you were. The British Army came to me, Ada. I said, "Why not?"
— They'll put that on your grave, Tom. 'Tommy Shelby — "Why not?"'

Dad: Kieran's a good man. If he intends to make an honest woman of you, he has my permission.
<...>
Gemma: Look, I know this place may not look like much and I know you'd prefer better for me and I know that comes from a good place, but I am proud of what I've got. What I've made. What I'm making.
Kieran won't propose to me because he respects the fact that I think that marriage is bullshit. But if he ever did, the only permission he'd require is mine.

— It's been so quick. Are you quite, quite sure?
— Myra, I was never so sure of anything in my life. In the moment you left me after the air raid, I knew I must find you again. I've found you and I'll never let you go. Does that answer you?