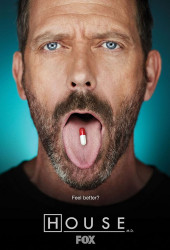 House (also called House, M. D.) is an American medical drama television series that originally ran on the Fox network for eight seasons, from November 16, 2004 to May 21, 2012.

The series's main character is Dr. Gregory House (Hugh Laurie), an unconventional, misanthropic medical genius who, despite his dependence on pain medication, leads a team of diagnosticians at the fictional Princeton–Plainsboro Teaching Hospital (PPTH) in New Jersey. The series's premise originated with Paul Attanasio, while David Shore, who is credited as creator, was primarily responsible for the conception of the title character.

Everything sucks. Might as well find something to smile about.

You don’t like it, there are exits on every floor.

Mistakes are as serious as the results they cause!

I did everything right, she died anyway! Why the hell do you think that would make me feel any better?!

— Pay attention to me!
— Sorry, that would make it harder to ignore you.

Successes only last until someone screws them up. Failures are forever.

You talk to God, you're religious. God talks to you, you're psychotic.

Her lips say no, but her hormones say 'Oh my God, yes, more'.

— You're an atheist.
— Only on Christmas and Easter, the rest of the time it doesn't really matter.

— I realized they could be my friends.
— You're serious?
— And then I sobered up.

You love everybody. That’s your pathology.