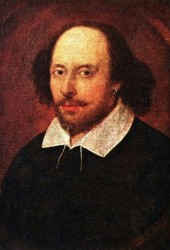 26 April 1564 – 23 April 1616) was an English poet, playwright, and actor, widely regarded as the greatest writer in the English language and the world's greatest dramatist. He is often called England's national poet and the "Bard of Avon". His extant works, including collaborations, consist of some 39 plays, 154 sonnets, two long narrative poems, and a few other verses, some of uncertain authorship. His plays have been translated into every major living language and are performed more often than those of any other playwright.Shakespeare was born and raised in Stratford-upon-Avon, Warwickshire. At the age of 18, he married Anne Hathaway, with whom he had three children: Susanna and twins Hamnet and Judith. Sometime between 1585 and 1592, he began a successful career in London as an actor, writer, and part-owner of a playing company called the Lord Chamberlain's Men, later known as the King's Men. At age 49 (around 1613), he appears to have retired to Stratford, where he died three years later. Few records of Shakespeare's private life survive; this has stimulated considerable speculation about such matters as his physical appearance, his sexuality, his religious beliefs, and whether the works attributed to him were written by others. Such theories are often criticised for failing to adequately note that few records survive of most commoners of the period.
Shakespeare produced most of his known works between 1589 and 1613. His early plays were primarily comedies and histories and are regarded as some of the best work produced in these genres. Until about 1608, he wrote mainly tragedies, among them Hamlet, Othello, King Lear, and Macbeth, all considered to be among the finest works in the English language. In the last phase of his life, he wrote tragicomedies (also known as romances) and collaborated with other playwrights.
Many of Shakespeare's plays were published in editions of varying quality and accuracy in his lifetime. However, in 1623, two fellow actors and friends of Shakespeare's, John Heminges and Henry Condell, published a more definitive text known as the First Folio, a posthumous collected edition of Shakespeare's dramatic works that included all but two of his plays. The volume was prefaced with a poem by Ben Jonson, in which Jonson presciently hails Shakespeare in a now-famous quote as "not of an age, but for all time".Throughout the 20th and 21st centuries, Shakespeare's works have been continually adapted and rediscovered by new movements in scholarship and performance. His plays remain popular and are studied, performed, and reinterpreted through various cultural and political contexts around the world.

Occupation:
playwright, poet
Born:
04/26/64
Died:
04/23/16 (51)
Books:
A Midsummer Night's Dream
As You Like It
Hamlet
Henry VI
Julius Caesar
Love's Labour's Lost
Macbeth
Othello
Romeo and Juliet
The Life of King Henry the Fifth
The Merry Wives of Windsor
The Tempest
The Tragedy of King Lear
Troilus and Cressida
Films (Writer):
10 Things I Hate About You (1999)
Hamlet (1948)

In faith, I do not love thee with mine eyes,
For they in thee a thousand errors note;
But 'tis my heart that loves what they despise,
Who in despite of view is pleased to dote.

My love is strength'ned, though more weak in seeming;
I love not less, though less the show appear:
That love is merchandised whose rich esteeming
The owner's tongue doth publish every where.

Nothing is really good or bad in itself — it’s all what a person thinks about it.

All is well that ends well.

Or, if they sleep, thy picture in my sight
Awakes my heart to heart's and eye's delight.

A good heart's worth gold.

But those tears are pearl which thy love sheds,
And they are rich and ransom all ill deeds.

But why thy odour matcheth not thy show,
The soil is this, that thou dost common grow.

I love thee in such sort,
As thou being mine, mine is thy good report.

So true a fool is love that in your will
(Though you do any thing) he thinks no ill.

Love is not love,
Which alters when it alteration finds,
Or bends with the remover to remove.

O cunning Love! with tears thou keep'st me blind,
Lest eyes well-seeing thy foul faults should find.

Let me confess that we two must be twain,
Although our undivided loves are one:
So shall those blots that do with me remain,
Without thy help, by me be borne alone.

In our two loves there is but one respect,
Though in our lives a separable spite,
Which though it alter not love's sole effect,
Yet doth it steal sweet hours from love's delight.

I may not evermore acknowledge thee,
Lest my bewaild guilt should do thee shame,
Nor thou with public kindness honour me,
Unless thou take that honour from thy name:

But do not so; I love thee in such sort,
As thou being mine, mine is thy good report.

How can it? O, how can Love's eye be true,
That is so vex'd with watching and with tears?
No marvel then, though I mistake my view;
The sun itself sees not till heaven clears.

Being your slave, what should I do but tend
Upon the hours and times of your desire?
I have no precious time at all to spend,
Nor services to do, till you require.
Nor dare I chide the world-without-end hour
Whilst I, my sovereign, watch the clock for you,
Nor think the bitterness of absence sour
When you have bid your servant once adieu;
Nor dare I question with my jealous thought
Where you may be, or your affairs suppose,
But, like a sad slave, stay and think of nought
Save, where you are how happy you make those.
So true a fool is love that in your will,
Though you do any thing, he thinks no ill.

But be contented: when that fell arrest
Without all bail shall carry me away,
My life hath in this line some interest,
Which for memorial still with thee shall stay.
When thou reviewest this, thou dost review
The very part was consecrate to thee:
The earth can have but earth, which is his due;
My spirit is thine, the better part of me:
So then thou hast but lost the dregs of life,
The prey of worms, my body being dead,
The coward conquest of a wretch's knife,
Too base of thee to be remembered.
The worth of that is that which it contains,
And that is this, and this with thee remains.