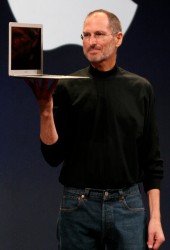 He was the chairman, chief executive officer (CEO), and co-founder of Apple Inc., the chairman and majority shareholder of Pixar, a member of The Walt Disney Company's board of directors following its acquisition of Pixar, and the founder, chairman, and CEO of NeXT. Jobs is widely recognized as a pioneer of the microcomputer revolution of the 1970s and 1980s, along with Apple co-founder Steve Wozniak.
Jobs was born in San Francisco, California and put up for adoption. He was raised in the San Francisco Bay Area. He attended Reed College in 1972 before dropping out that same year, and traveled through India in 1974 seeking enlightenment and studying Zen Buddhism. His declassified FBI report states that he used marijuana and LSD while he was in college, and once told a reporter that taking LSD was "one of the two or three most important things" he had done in his life.
Jobs and Wozniak co-founded Apple in 1976 to sell Wozniak's Apple I personal computer. Together the duo gained fame and wealth a year later with the Apple II, one of the first highly successful mass-produced personal computers. Jobs saw the commercial potential of the Xerox Alto in 1979, which was mouse-driven and had a graphical user interface (GUI). This led to development of the unsuccessful Apple Lisa in 1983, followed by the breakthrough Macintosh in 1984, the first mass-produced computer with a GUI. The Macintosh introduced the desktop publishing industry in 1985 with the addition of the Apple LaserWriter, the first laser printer to feature vector graphics. Jobs was forced out of Apple in 1985 after a long power struggle with the company's board and its then-CEO John Sculley. That same year, Jobs took a few of Apple's members with him to found NeXT, a computer platform development company that specialized in computers for higher-education and business markets. In addition, he helped to develop the visual effects industry when he funded the computer graphics division of George Lucas's Lucasfilm in 1986. The new company was Pixar, which produced the first 3D computer animated film Toy Story (1995).
Apple merged with NeXT in 1997, and Jobs became CEO of his former company within a few months. He was largely responsible for helping revive Apple, which had been at the verge of bankruptcy. He worked closely with designer Jony Ive to develop a line of products that had larger cultural ramifications, beginning in 1997 with the "Think different" advertising campaign and leading to the iMac, iTunes, iTunes Store, Apple Store, iPod, iPhone, App Store, and the iPad. In 2001, the original Mac OS was replaced with a completely new Mac OS X, based on NeXT's NeXTSTEP platform, giving the OS a modern Unix-based foundation for the first time. Jobs was diagnosed with a pancreatic neuroendocrine tumor in 2003. He died of respiratory arrest related to the tumor at age 56 on October 5, 2011.

Being the richest man in the cemetery doesn't matter to me… Going to bed at night saying we've done something wonderful… that's what matters to me.

When you’re young, you look at television and think, there’s a conspiracy. The networks have conspired to dumb us down. But when you get a little older, you realize that’s not true. The networks are in business to give people exactly what they want. That’s a far more depressing thought. Conspiracy is optimistic! You can shoot the bastards! We can have a revolution! But the networks are really in business to give people what they want. It’s the truth.

Remembering that I’ll be dead soon is the most important tool I’ve ever encountered to help me make the big choices in life. Because almost everything—all external expectations, all pride, all fear of embarrassment or failure—these things just fall away in the face of death, leaving only what is truly important. Remembering that you are going to die is the best way I know to avoid the trap of thinking you have something to lose. You are already naked. There is no reason not to follow your heart.

Your time is limited, so don’t waste it living someone else’s life. Don’t be trapped by dogma—which is living with the results of other people’s thinking. Don’t let the noise of others’ opinions drown out your own inner voice. And most important, have the courage to follow your heart and intuition. They somehow already know what you truly want to become. Everything else is secondary.

It was not all romantic. I did not have a dorm room, so I slept on the floor in friends’ rooms, I returned coke bottles for 5 cents, to buy food and go for 7 miles across town every Sunday night, once a week to eat normally at the Hare Krishna temple. I loved it. And much of, from what I’ve come across, following my curiosity and intuition, turned out to be priceless later.

My girlfriend always laughs during sex—no matter what she’s reading.

Stay Hungry. Stay Foolish. And I have always wished that for myself. And now, as you graduate to begin anew, I wish that for you.

We made the buttons on the screen look so good you’ll want to lick them.

Innovation distinguishes between a leader and a follower.

I would trade all of my technology for an afternoon with Socrates.

Creativity is just connecting things. When you ask creative people how they did something, they feel a little guilty because they didn’t really do it, they just saw something. It seemed obvious to them after a while. That’s because they were able to connect experiences they’ve had and synthesize new things. And the reason they were able to do that was that they’ve had more experiences or they have thought more about their experiences than other people.

It’s really hard to design products by focus groups. A lot of times, people don’t know what they want until you show it to them.

I'm the only person I know that's lost a quarter of a billion dollars in one year… It's very character-building.

My model for business is The Beatles. They were four guys who kept each other’s kind of negative tendencies in check. They balanced each other and the total was greater than the sum of the parts. That’s how I see business: great things in business are never done by one person, they’re done by a team of people.

It’s more fun to be a pirate than to join the navy.

Picasso had a saying – ‘good artists copy, great artists steal‘ – and we have always been shameless about stealing great ideas.