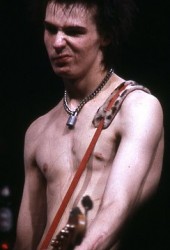 He achieved fame as a member of the punk rock band the Sex Pistols, replacing Glen Matlock, who had fallen out of favour with the rest of the group.
Due to intravenous drug use, Vicious was hospitalised with hepatitis during the recording of the Sex Pistols' only studio album, Never Mind the Bollocks, Here's the Sex Pistols; his bass is only partially featured on one song - "Bodies". Vicious later appeared as a lead vocalist, performing three songs, on the soundtrack to The Great Rock 'n' Roll Swindle, a largely fictionalised documentary about the Sex Pistols. As the Sex Pistols were gaining attention, Vicious met Nancy Spungen, and the pair entered a relationship which culminated in Spungen's death from an apparent stab wound while staying in New York City's Hotel Chelsea with Vicious. Under suspicion of murder, Vicious was released on bail; he was arrested again for assaulting Todd Smith, brother of Patti Smith, at a nightclub, and underwent drug rehabilitation on Rikers Island. He died in 1979 after overdosing on heroin.
Less than four weeks after Vicious's death, The Great Rock 'n' Roll Swindle soundtrack was released. On 15 December 1979, a compilation of live material recorded during his brief solo career was released as Sid Sings. Gary Oldman portrayed Vicious in the 1986 biopic Sid and Nancy.

We're really quite nice and friendly, but everyone has a beastly side to them, don't they?