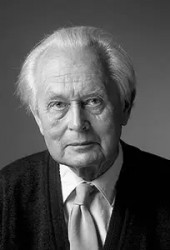 Piet Hein was a Danish polymath (mathematician, inventor, designer, writer and poet), often writing under the Old Norse pseudonym Kumbel, meaning "tombstone". His short poems, known as gruks or grooks (Danish: gruk), first started to appear in the daily newspaper Politiken shortly after the German occupation of Denmark in April 1940 under the pseudonym "Kumbel Kumbell". He also invented the Soma cube and the board game Hex.

Losing one glove is certainly painful,
but nothing compared to the pain,
of losing one, throwing away the other,
and finding the first one again.