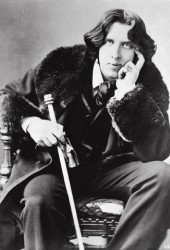 After writing in different forms throughout the 1880s, he became one of London's most popular playwrights in the early 1890s. He is best remembered for his epigrams and plays, his novel The Picture of Dorian Gray, and the circumstances of his criminal conviction for "gross indecency", imprisonment, and early death at age 46.
Wilde's parents were successful Anglo-Irish intellectuals in Dublin. Their son became fluent in French and German early in life. At university, Wilde read Greats; he proved himself to be an outstanding classicist, first at Trinity College Dublin, then at Oxford. He became known for his involvement in the rising philosophy of aestheticism, led by two of his tutors, Walter Pater and John Ruskin. After university, Wilde moved to London into fashionable cultural and social circles.
As a spokesman for aestheticism, he tried his hand at various literary activities: he published a book of poems, lectured in the United States and Canada on the new "English Renaissance in Art" and interior decoration, and then returned to London where he worked prolifically as a journalist. Known for his biting wit, flamboyant dress and glittering conversational skill, Wilde became one of the best-known personalities of his day. At the turn of the 1890s, he refined his ideas about the supremacy of art in a series of dialogues and essays, and incorporated themes of decadence, duplicity, and beauty into what would be his only novel, The Picture of Dorian Gray (1890). The opportunity to construct aesthetic details precisely, and combine them with larger social themes, drew Wilde to write drama. He wrote Salome (1891) in French while in Paris but it was refused a licence for England due to an absolute prohibition on the portrayal of Biblical subjects on the English stage. Unperturbed, Wilde produced four society comedies in the early 1890s, which made him one of the most successful playwrights of late-Victorian London.
At the height of his fame and success, while The Importance of Being Earnest (1895) was still being performed in London, Wilde had the Marquess of Queensberry prosecuted for criminal libel. The Marquess was the father of Wilde's lover, Lord Alfred Douglas. The libel trial unearthed evidence that caused Wilde to drop his charges and led to his own arrest and trial for gross indecency with men. After two more trials he was convicted and sentenced to two years' hard labour, the maximum penalty, and was jailed from 1895 to 1897. During his last year in prison, he wrote De Profundis (published posthumously in 1905), a long letter which discusses his spiritual journey through his trials, forming a dark counterpoint to his earlier philosophy of pleasure. On his release, he left immediately for France, never to return to Ireland or Britain. There he wrote his last work, The Ballad of Reading Gaol (1898), a long poem commemorating the harsh rhythms of prison life.

Occupation:
writer, poet
Born:
10/16/54
Died:
11/30/00 (46)
Books:
An Ideal Husband
De Profundis
Lady Windermere's Fan
Lord Arthur Savile's crime
Panthea
Phrases And Philosophies for the Use of The Young
Ravenna
The Ballad of Reading Gaol
The Birthday of the Infanta
The Canterville Ghost
The Duchess of Padua
The Importance of Being Earnest
The Nightingale and the Rose
The Picture of Dorian Gray
Films (Writer):
Dorian Gray
Wilde

Always forgive your enemies — nothing annoys them so much.

I have simple tastes. I am always satisfied with the best

Man is least himself when he talks in his own person. Give him a mask, and he will tell you the truth.

For one moment our lives met our souls touched.

The best way to make children good is to make them happy.

Beauty is in the eye of the beholder.

Be yourself; everyone else is already taken.

Keep love in your heart. A life without it is like a sunless garden when the flowers are dead.

The only thing to do with good advice is to pass it on. It is never of any use to oneself.

Prayer must never be answered: if it is, it ceases to be prayer and becomes correspondence.

Fashion is a form of ugliness so intolerable that we have to alter it every six months.

I am not young enough to know everything.

To live is the rarest thing in the world. Most people exist, that is all.

There are many things that we would throw away if we were not afraid that others might pick them up.