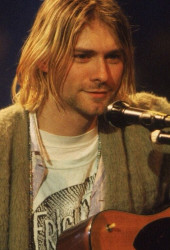 Kurt Donald Cobain (February 20, 1967 – April 5, 1994) was an American singer, songwriter, and musician, best known as the guitarist and frontman of the rock band Nirvana.

He is remembered as one of the most iconic and influential rock musicians in the history of alternative music.
Born in Aberdeen, Washington, Cobain formed the band Nirvana with Krist Novoselic and Aaron Burckhard in 1987 and established it as part of the Seattle music scene which later became known as grunge. After signing with major label DGC Records, Nirvana found success with "Smells Like Teen Spirit" from their second album Nevermind (1991). Following the success of Nevermind, Nirvana was labelled "the flagship band" of Generation X, and Cobain was hailed as "the spokesman of a generation"; however, Cobain resented this, believing his message and artistic vision had been misinterpreted by the public, with his personal problems often subject to media attention.During the last years of his life, Cobain struggled with heroin addiction and chronic health problems such as depression. He also struggled with the personal and professional pressures of fame, and his marriage to musician Courtney Love. On April 8, 1994, Cobain was found dead at his home in Seattle at the age of 27; police concluded he had died on April 5 from a self-inflicted shotgun wound to his head.Cobain has been described as a "Generation X icon". He was posthumously inducted into the Rock and Roll Hall of Fame, along with Nirvana bandmates Dave Grohl and Novoselic, in their first year of eligibility in 2014. In 2003, David Fricke of Rolling Stone ranked him the 12th greatest guitarist of all time. He was ranked 7th by MTV in the "22 Greatest Voices in Music". In 2006, he was placed 20th by Hit Parader on their list of the "100 Greatest Metal Singers of All Time".

Drugs are a waste of time. They destroy your memory and your self-respect and everything that goes along with with your self-esteem. They're no good at all.

I use bits and pieces of others personalities to form my own.

My name is Kurt and I sing and play the guitar and I'm a walking, talking bacterial infection

I just don't like to get intimate. I don't want anyone to know what I feel and what I think, and if they can't get some kind of an idea of what sort of person I am through my music, then that's too bad.

If you're a sexist, racist, homophobe, or basically an asshole, don't buy this CD. I don't care if you like me, I hate you.

We're so trendy we can't even escape ourselves.

If you die you're completely happy and your soul somewhere lives on. I'm not afraid of dying. Total peace after death, becoming someone else is the best hope I've got.

I must be one of those narcissists who only appreciate things when they're gone.

Rape is one of the most terrible crimes on earth and it happens every few minutes. The problem with groups who deal with rape is that they try to educate women about how to defend themselves. What really needs to be done is teaching men not to rape. Go to the source and start there.

I'm not gay, although I wish I were, just to piss off the homophobes.

Punk rock should mean freedom, liking and excepting anything that you like. Playing whatever you want. As sloppy as you want. As long as it's good and it has passion.

A friend is nothing but a known enemy.

If my eyes could show my soul, everyone would cry when they saw me smile.