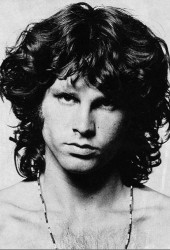 James Douglas Morrison (December 8, 1943 – July 3, 1971) was an American singer, songwriter and poet, who served as the lead vocalist of the rock band the Doors.

Due to his poetic lyrics, distinctive voice, wild personality, unpredictable and erratic performances, and the dramatic circumstances surrounding his life and early death, Morrison is regarded by music critics and fans as one of the most iconic and influential frontmen in rock history. Since his death, his fame has endured as one of popular culture's most rebellious and oft-displayed icons, representing the generation gap and youth counterculture.Together with Ray Manzarek, Morrison co-founded the Doors during the summer of 1965 in Venice, California. The band spent two years in obscurity until shooting to prominence with their number-one single in the United States, "Light My Fire," taken from their self-titled debut album. Morrison wrote or co-wrote many of the Doors' songs, including "Light My Fire", "Break On Through (To the Other Side)", "The End", "Moonlight Drive", "People Are Strange", "Hello, I Love You", "Roadhouse Blues", "L.A. Woman", and "Riders on the Storm". He recorded a total of six studio albums with the Doors, all of which sold well and received critical acclaim. Though the Doors recorded two more albums after Morrison died, his death severely affected the band's fortunes, and they split up in 1973. In 1993, Morrison was inducted into the Rock and Roll Hall of Fame as a member of the Doors.
Morrison was also well known for improvising spoken word poetry passages while the band played live. Morrison was ranked number 47 on Rolling Stone's list of the "100 Greatest Singers of All Time", and number 22 on Classic Rock magazine's "50 Greatest Singers in Rock". Manzarek said Morrison "embodied hippie counterculture rebellion".Morrison developed an alcohol dependency during the 1960s, which at times affected his performances on stage. He died unexpectedly at the age of 27 in Paris. As no autopsy was performed, the cause of Morrison's death remains unknown.

Sometimes it just takes a moment to forget a life, but sometimes life is not enough to forget for a moment.

Hatred is a very underestimated emotion.

People fear death even more than pain. It's strange that they fear death. Life hurts a lot more than death. At the point of death, the pain is over.

Listen, real poetry doesn't say anything; it just ticks off the possibilities. Opens all doors. You can walk through anyone that suits you.

There may be a time when we'll attend Weather Theaters to recall the sensation of rain.

I see myself as a huge fiery comet, a shooting star. Everyone stops, points up and gasps "Oh look at that!" Then — whoosh, and I'm gone... and they'll never see anything like it ever again... and they won't be able to forget me — ever.

If my poetry aims to achieve anything, it's to deliver people from the limited ways in which they see and feel.

I am interested in anything about revolt, disorder, chaos-especially activity that seems to have no meaning. It seems to me to be the road toward freedom...

Death is only going to happen to you once; I don't want to miss it.

Imprisonment begins with birth. Society, parents they refuse to allow you to keep the freedom you were born with.

Thoughts in time
And out of season.
The hitchhiker stood
By the side of the road,
And leveled his thumb
In the calm the calculus
Of reason…

Expose yourself to your deepest fear; after that, fear has no power, and the fear of freedom shrinks and vanishes. You are free.