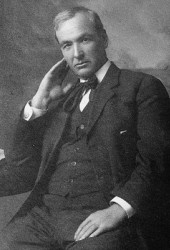 Edgar Watson Howe (May 3, 1853 – October 3, 1937), was an American novelist and newspaper and magazine editor in the late 19th and early 20th centuries. He was perhaps best known for his magazine, E.W. Howe's Monthly. Howe was well traveled and known for his sharp wit in his editorials.

When a man has no reason to trust himself, he trusts in luck.

A woman who can't forgive should never have more than a nodding acquaintance with a man.

Some men are alive simply because it is against the law to kill them.

Nothing is wonderful when you get used to it.