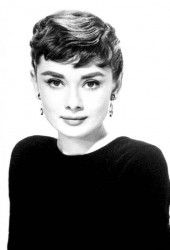 Recognised as a film and fashion icon, Hepburn was active during Hollywood's Golden Age. She was ranked by the American Film Institute as the third-greatest female screen legend in Golden Age Hollywood, and was inducted into the International Best Dressed List Hall of Fame.
Born in Ixelles, Brussels, Hepburn spent her childhood between Belgium, England, and the Netherlands. In Amsterdam, she studied ballet with Sonia Gaskell. She moved to London in 1948, where she continued her ballet training with Marie Rambert. She began performing as a chorus girl in West End musical theatre productions. Following minor appearances in several films, Hepburn starred in the 1951 Broadway play Gigi after being spotted by French novelist Colette, on whose work the play was based.
She rose to stardom after playing the lead role in Roman Holiday (1953), for which she was the first actress to win an Academy Award, a Golden Globe Award, and a BAFTA Award for a single performance. That same year, Hepburn won a Tony Award for Best Lead Actress in a Play for her performance in Ondine. She went on to star in a number of successful films, such as Sabrina (1954), The Nun's Story (1959), Breakfast at Tiffany's (1961), Charade (1963), My Fair Lady (1964), and Wait Until Dark (1967), for which she received Academy Award, Golden Globe and BAFTA nominations. She won three BAFTA Awards for Best British Actress in a Leading Role. In recognition of her film career, she received BAFTA's Lifetime Achievement Award, the Golden Globe Cecil B. DeMille Award, the Screen Actors Guild Life Achievement Award, and the Special Tony Award. She remains one of only 15 people who have won Academy, Emmy, Grammy, and Tony Awards.
In her later life, Hepburn appeared in fewer films, devoting much of her time to UNICEF. She had contributed to the organisation since 1954, then worked in some of the poorest communities of Africa, South America, and Asia between 1988 and 1992. In December 1992, she received the Presidential Medal of Freedom in recognition of her work as a UNICEF Goodwill Ambassador. A month later, she died of appendiceal cancer at her home in Switzerland at the age of 63.

I love people who make me laugh. I honestly think it's the thing I like most, to laugh. It cures a multitude of ills. It's probably the most important thing in a person.

If you ever need a helping hand, it is at the end of your arm. As you get older you must remember you have a second hand. The first one is to help yourself. The second hand is to help others.

The beauty of a woman must be seen from in her eyes, because that is the doorway to her heart, the place where love resides.

I don't need a bedroom to prove my womanliness. I can convey just as much sex appeal picking apples off a tree or standing in the rain.

As a child, I was taught that it was bad manners to bring attention to yourself, and to never, ever make a spectacle of yourself... All of which I've earned a living doing.

I am proud to have been in a business that gives pleasure, creates beauty, and awakens our conscience, arouses compassion, and perhaps most importantly, gives millions a respite from our so violent world.

If my world were to cave in tomorrow, I would look back on all the pleasures, excitements and worthwhilenesses I have been lucky enough to have had. Not the sadness, not my miscarriages or my father leaving home, but the joy of everything else. It will have been enough.

You can always tell what kind of a person a man really thinks you are by the earrings he gives you.

I'm an introvert... I love being by myself, love being outdoors, love taking a long walk with my dogs and looking at the trees, flowers, the sky.

There are certain shades of limelight that can wreck a girl's complexion.

Nothing is impossible, the word itself says: "I'm possible!"

People associate me with a time when movies were pleasant, when women wore pretty dresses in films and you heard beautiful music. I always love it when people write me and say «I was having a rotten time, and I walked into a cinema and saw one of your movies, and it made such a difference».