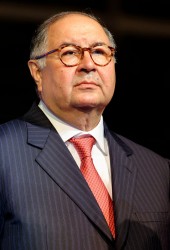 We believe that justice conquers after all, even if sometimes life's not enough for it.

I am not the king of the Internet. Jobs, Gates, Zuckerberg, Grishin, Durov are its kings. And I'm an Internet's merchant and its fan.

I'm not a fatalist, but I don't like to be dependent on something or someone. I can only depend on my president or my wife.

Pierre de Coubertin’s ideas and messages are surprisingly still up-to-date representing the philosophy of the Olympic movement. This is a multifaceted and wise philosophy and everyone finds something personally important in it. I personally view as very important such ideas as people’s aspiration for perfection and unification, since only a peaceful competition forms the noble basis for the Olympic movement. This is as relevant as ever in the modern world, which opens unlimited opportunities for people, but at the same time is being torn by conflicts, contradictions and standoffs. However, I am an optimist and I strongly believe in the bright future of the international Olympic movement, I am glad to see changes that took place in the sports movement of Russia.

My main principle as the President of the International Fencing Federation is never to use my position to achieve advantages for Russian athletes, but to fundamentally resist attempts of biased judging.