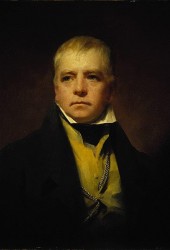 Many of his works remain classics of both English-language literature and of Scottish literature. Famous titles include Ivanhoe, Rob Roy, Old Mortality, The Lady of the Lake, Waverley, The Heart of Midlothian and The Bride of Lammermoor.
Although primarily remembered for his extensive literary works and his political engagement, Scott was an advocate, judge and legal administrator by profession, and throughout his career combined his writing and editing work with his daily occupation as Clerk of Session and Sheriff-Depute of Selkirkshire.
A prominent member of the Tory establishment in Edinburgh, Scott was an active member of the Highland Society, served a long term as President of the Royal Society of Edinburgh (1820–32) and was a Vice President of the Society of Antiquaries of Scotland (1827-1829).Scott's knowledge of history, and his facility with literary technique, made him a seminal figure in the establishment of the historical novel genre, as well as an exemplar of European literary Romanticism.

For he that does good, having the unlimited power to do evil, deserves praise not only for the good which he performs, but for the evil which he forbears.

Trial moves rapidly on when the judge has determined the sentence beforehand.

...how easy it is for the tongue to betray what the heart would gladly conceal.

"Courtesy of tongue, " said Rowena, "when it is used to veil churlishness of deed, is but a knight's girdle around the breast of a base clown."

The single drop of rain which mixes with the sea becomes an individual part of that resistless ocean, which undermines rocks and ingulfs royal armadas.

If thou readest the Scripture and the lives of the saints, only to justify thine own license and profligacy, thy crime is like that of him who extracts poison from the most healthful and necessary herbs.

I have heard men talk of the blessings of freedom, " he said to himself, "but I wish any wise man would teach me what use to make of it now that I have it.

...since the difficulties which render it arduous render it also glorious.

Adversity bends the heart as fire bends the stubborn steel.

Oh, what a tangled web we weave,
When first we practise to deceive!