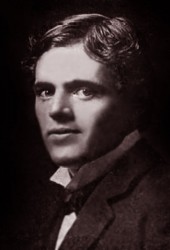 A pioneer in the world of commercial magazine fiction, he was one of the first writers to become a worldwide celebrity and earn a large fortune from writing. He was also an innovator in the genre that would later become known as science fiction.His most famous works include The Call of the Wild and White Fang, both set in the Klondike Gold Rush, as well as the short stories "To Build a Fire", "An Odyssey of the North", and "Love of Life". He also wrote about the South Pacific in stories such as "The Pearls of Parlay" and "The Heathen".
London was part of the radical literary group "The Crowd" in San Francisco and a passionate advocate of unionization, socialism, and the rights of workers. He wrote several powerful works dealing with these topics, such as his dystopian novel The Iron Heel, his non-fiction exposé The People of the Abyss, and The War of the Classes.

When one played a strange game, he should let the other fellow play first.

If I don’t like a thing, I don’t like it, that’s all; and there is no reason under the sun why I should ape a liking for it just because the majority of my fellow-creatures like it, or make believe they like it. I can’t follow the fashions in the things I like or dislike.

Limited minds can recognize limitations only in others.

And yet I am stifled with desire to tell.

At the very moment when he had abandoned the fight, the tide turned.

He ached with life.

Love was beyond reason; it was superrational. Love lay on the mountain-tops beyond the valley-land of reason. It was a sublimates condition of existence, the topmost peak of living, and it came rarely.

There seems to be so much in me I want to say. But it is all so big. I can’t find ways to say what is really in me. Sometimes it seems to me that all the world, all life, everything, had taken up residence inside of me and was clamoring for me to be the spokesman. I feel-oh, I can’t describe it-I feel the bigness of it, but when I speak, I babble like a little child. It is a great task to transmute feeling and sensation into speech, written or spoken, that will, in turn, in him who reads or listens, transmute itself back into the selfsame feeling and sensation. It is a lordly task.

It is easy to be kind.

And to think of it, I dreamed in my innocence that the persons who sat in the high places, who lived in fine houses and had educations and bank accounts, were worth while!

He had hitched his wagon to a star and been landed in a pestiferous marsh.

One acts according to one’s lights, and more than that one cannot do.

Her own limits were the limits of her horizon; but limited minds can recognize limitations only in others. And so she felt that her outlook was very wide indeed, and that where his conflicted with hers marked his limitations.

It was the old tragedy of insularity trying to serve as mentor to the universal.

He travels the fastest who travels alone.