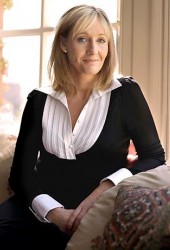 She is best known for writing the Harry Potter fantasy series, which has won multiple awards and sold more than 500 million copies, becoming the best-selling book series in history. The books are the basis of a popular film series, over which Rowling had overall approval on the scripts and was a producer on the final films. She also writes crime fiction under the name Robert Galbraith.
Born in Yate, Gloucestershire, Rowling was working as a researcher and bilingual secretary for Amnesty International when she conceived the idea for the Harry Potter series while on a delayed train from Manchester to London in 1990. The seven-year period that followed saw the death of her mother, birth of her first child, divorce from her first husband, and relative poverty until the first novel in the series, Harry Potter and the Philosopher's Stone, was published in 1997. There were six sequels, of which the last, Harry Potter and the Deathly Hallows, was released in 2007. Since then, Rowling has written five books for adult readers: The Casual Vacancy (2012) and—under the pseudonym Robert Galbraith—the crime fiction Cormoran Strike series, which consists of The Cuckoo's Calling (2013), The Silkworm (2014), Career of Evil (2015), and Lethal White (2018).Rowling has lived a "rags to riches" life in which she progressed from living on benefits to being the world's first billionaire author. She lost her billionaire status after giving away much of her earnings to charity but remains one of the wealthiest people in the world. She is the UK's best-selling living author, with sales in excess of £238 million. The 2016 Sunday Times Rich List estimated Rowling's fortune at £600 million, ranking her as the joint 197th richest person in the UK. Time named her a runner-up for its 2007 Person of the Year, noting the social, moral, and political inspiration she has given her fans. In October 2010, Rowling was named the "Most Influential Woman in Britain" by leading magazine editors. She has supported multiple charities, including Comic Relief, One Parent Families, and Multiple Sclerosis Society of Great Britain, as well as launching her own charity, Lumos.

Do not pity the dead, Harry. Pity the living and above all, those who live without love.

Numbing the pain for a while will make it worse when you finally feel it.

The truth. It is a beautiful and terrible thing, and should therefore be treated with caution.

It does not do to dwell on dreams and forget to live.

We are only as strong as we are united, as weak as we are divided.

People find it far easier to forgive others for being wrong than being right.

You think the dead we loved truly ever leave us? You think we don’t recall them more clearly in times of great trouble?

It is the unknown we fear when we look upon death and darkness, nothing more.

The consequences of our actions are so complicated, so diverse, that predicting the future is a very difficult business indeed.

To the well-organized mind, death is but the next great adventure.

— Don't go!
— Those that we love never truly leave us, Harry. There are things that death cannot touch. Paint... and memory... and love.

The dedication of this book is split seven ways: to Neil, to Jessica, to David, to Kenzie, to Di, to Anne, and to you, if you have stuck with Harry until the very end.

Harry, there is never a perfect answer in this messy, emotional world. Perfection is beyond the reach of humankind, beyond the reach of magic. In every shining moment of happiness is that drop of poison: the knowledge that pain will come again. Be honest to those you love, show your pain. To suffer is as human as to breathe.

Enter, stranger, but take heed
Of what awaits the sin of greed,
For those who take, but do not earn,
Must pay most dearly in their turn,
So if you seek beneath our floors
A treasure that was never yours,
Thief, you have been warned, beware
Of finding more than treasure there.

Love blinds. We have both tried to give our sons, not what they needed, but what we needed. We’ve been so busy trying to rewrite our own pasts, we’ve blighted their present.