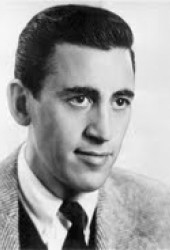 He was raised in Manhattan and began writing short stories while in secondary school. His father urged him to learn about the meat-importing business; he went to work in Europe but was so disgusted by the slaughterhouses that he decided to embark on a different career path. He left Austria one month before it was annexed by Nazi Germany on March 12, 1938. In 1942, he began to date Oona O'Neill, daughter of playwright Eugene O'Neill. He found her self-absorbed, yet he called her often and wrote her long letters. Their relationship ended when Oona began seeing Charlie Chaplin, whom she eventually married.
In 1948, his story "A Perfect Day for Bananafish" appeared in The New Yorker magazine, which also published much of his later work. The Catcher in the Rye was published in novel form in 1951, having been serialised earlier. Many adolescent readers appreciated his depiction of adolescent alienation and loss of innocence in protagonist Holden Caulfield. The novel remains widely read and controversial, selling around 250,000 copies a year. The success of The Catcher in the Rye led to public attention and scrutiny, and Salinger became reclusive and led an obsessively private life for more than a half-century. He published his final work in 1965, and gave his last interview in 1980. He died of natural causes on January 27, 2010, at his home in Cornish, New Hampshire.

Just because somebody's dead, you don't just stop liking them, for God's sake — especially if they were about a thousand times nicer than the people you know that're alive and all.

I’m always saying “Glad to’ve met you” to somebody I’m not at all glad I met. If you want to stay alive, you have to say that stuff, though.

What really knocks me out is a book that, when you're all done reading it, you wish the author that wrote it was a terrific friend of yours and you could call him up on the phone whenever you felt like it.

"What the hellya reading?" he said.
"Goddam book."
He shoved my book back with his hand so that he could see the name of it. "Any good?" he said.
"This sentence I'm reading is terrific." I can be quite sarcastic when I'm in the mood.

Girls. Jesus Christ. They can drive you crazy. They really can.

I’m quite illiterate, but I read a lot.

I was too depressed to care whether I had a good view or not.

I used to think she was quite intelligent, in my stupidity. The reason I did was because she knew quite a lot about the theater and plays and literature and all that stuff. If somebody knows quite a lot about those things, it takes you quite a while to find out whether they're really stupid or not.

Every time they do something pretty, even if they're not much to look at, or even if they're sort of stupid, you fall half in love with them, and then you never know where the hell you are.

People always think something’s all true. I don’t give a damn, except that I get bored sometimes when people tell me to act my age. Sometimes I act a lot older than I am — I really do — but people never notice it. People never notice anything.

It's really too bad that so much crumby stuff is a lot of fun sometimes.

If a girl looks swell when she meets you, who gives a damn if she's late?

Goddam money. It always ends up making you blue as hell.

I don't know if you've ever done it, but it's sort of hard to sit around waiting for somebody to say something when they're thinking and all.

I think that one of these days, you're going to have to find out where you want to go. And then you've got to start going there. But immediately. You can't afford to lose a minute. Not you.

Mothers are all slightly insane.