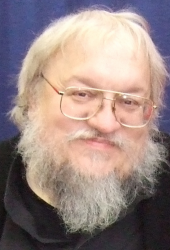 He is best known for his series of epic fantasy novels, A Song of Ice and Fire, which was adapted into the HBO series Game of Thrones (2011–2019).
In 2005, Lev Grossman of Time called Martin "the American Tolkien", and in 2011, he was included on the annual Time 100 list of the most influential people in the world.

Occupation:
writer, screenwriter, editor, film producer
Born:
09/20/48 (74)
Books:
A Dance with Dragons
A Storm of Swords
A Clash of Kings
A Feast for Crows
A Game of Thrones
Films (Actor):
Dead Poets Society

A reader lives a thousand lives before he dies, said Jojen. The man who never reads lives only one.

If a man paints a target on his chest, he should expect that sooner or later someone will loose an arrow on him.

Let them see that their words can cut you and you’ll never be free of the mockery. If they want to give you a name take it make it your own. Then they can’t hurt you with it anymore.

Why is it that when one man builds a wall, the next man immediately needs to know what's on the other side?

Never forget what you are, for surely the world will not. Make it your strength. Then it can never be your weakness. Armour yourself in it, and it will never be used to hurt you.

Only a fool humbles himself when the world is so full of men eager to do that job for him.

Words are wind. They cannot hurt you. Let them wash over you.

Crowns do queer things to the heads beneath them.

The wide world is full of people wanting help, Jon. Would that some could find the courage to help themselves.

The greatest fools are ofttimes more clever than the men who laugh at them.

Love is poison. A sweet poison, yes, but it will kill you all the same.

Always keep your foes confused. If they are never certain who you are or what you want, they cannot know what you are like to do next.

Winter will never come for the likes of us. Should we die in battle, they will surely sing of us, and it's always summer in the songs. In the songs all knights are gallant, all maids are beautiful, and the sun is always shining.

Summer friends will melt away like summer snows, but winter friends are friends forever.

A good act does not wash out the bad, nor a bad act the good.