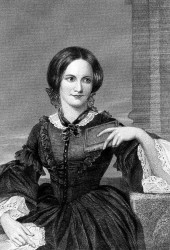 Charlotte Brontë (21 April 1816 – 31 March 1855) was an English novelist and poet, the eldest of the three Brontë sisters who survived into adulthood and whose novels became classics of English literature.

She enlisted in school at Roe Head in January 1831, aged 14 years. She left the year after to teach her sisters, Emily and Anne, at home, returning in 1835 as a governess. In 1839 she undertook the role as governess for the Sidgwick family but left after a few months to return to Haworth where the sisters opened a school, but failed to attract pupils. Instead, they turned to writing and they each first published in 1846 under the pseudonyms of Currer, Ellis and Acton Bell. While her first novel, The Professor, was rejected by publishers, her second novel, Jane Eyre, was published in 1847. The sisters admitted to their Bell pseudonyms in 1848, and by the following year were celebrated in London literary circles.
Brontë experienced the early deaths of all her siblings. She became pregnant shortly after her marriage in June 1854 but died on 31 March 1855, almost certainly from hyperemesis gravidarum, a complication of pregnancy which causes excessive nausea and vomiting.

... Be too self-respecting to lavish the love of the whole heart, soul, and strength, where such a gift is not wanted and would be despised.

When we are struck at without a reason, we should strike back again very hard; I am sure we should—so hard as to teach the person who struck us never to do it again.

As much good-will may be conveyed in one hearty word as in many.

There is no happiness like that of being loved by your fellow-creatures, and feeling that your presence is an addition to their comfort.

The look was far worse to resist than the frantic strain.

The more solitary, the more friendless, the more unsustained I am, the more I will respect myself.

Good fortune opens the hand as well as the heart wonderfully.

To be together is for us to be at once as free as in solitude, as gay as in company.

Children can feel, but they cannot analyse their feelings; and if the analysis is partially effected in thought, they know not how to express the result of the process in words.

For never may you, like me, dread to be the instrument of evil to what you wholly love.

Laws and principles are not for the times when there is no temptation: they are for such moments as this, when body and soul rise in mutiny against their rigour.

A man is nothing without a spice of the devil in him.

Reserved people often really need the frank discussion of their sentiments and griefs more than the expansive. The sternest-seeming stoic is human after all; and to “burst” with boldness and good-will into “the silent sea” of their souls is often to confer on them the first of obligations.

I had a theoretical reverence and homage for beauty, elegance, gallantry, fascination; but had I met those qualities incarnate in masculine shape, I should have known instinctively that they neither had nor could have sympathy with anything in me, and should have shunned them as one would fire, lightning, or anything else that is bright but antipathetic.

Where there is energy to command well enough, obedience never fails.

It is in vain to say human beings ought to be satisfied with tranquillity: they must have action; and they will make it if they cannot find it.